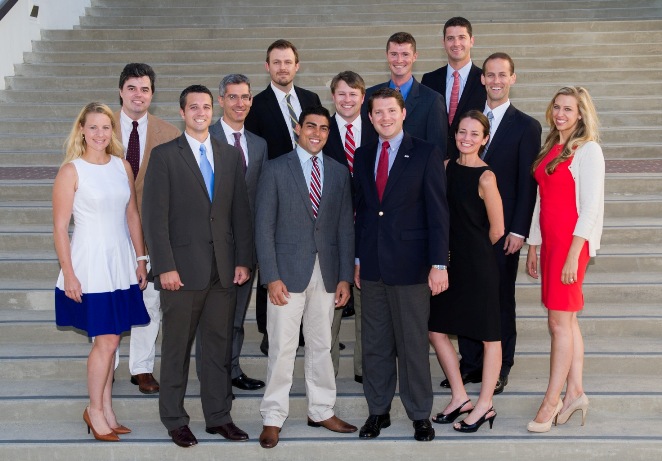 Natalie Burkholder is the creator and editor of Girl's Guide to Guns, an online publication dedicated to educating women about firearms and firearm safety. Her work has been featured in the Washington Times, the Washington Post, and New York Magazine. Ms. Burkholder has also discussed responsible gun ownership on MSNBC, ABC, the Discovery Channel, and NRA News. Before starting Girl's Guide to Guns, she worked at Miramax Films and New Line Cinema. Ms. Burkholder received her B.A. in telecommunications from Baylor University.

Edward John Craig is the Managing Editor of National Review Online. Previously, he was Director of External Affairs at the Manhattan Institute, and held numerous editorial positions at MI's City Journal and Trial Lawyers, Inc. He holds B.A. in English and Religion from Wesleyan University and an M.A. in Biblical Studies from Fordham University.

Wesley Goodman is the Managing Director of the Conservative Action Project, an organization aimed at coordinating strategy and policy among leading conservatives and conservative organizations. He was the Director of Conservative Coalitions and State Outreach for Congressman Jim Jordan (R-OH), then Chairman of the House Republican Study Committee. Mr. Goodman has also worked for Senator Mike DeWine (R-OH) and Senator Sam Brownback (R-KS). He holds a B.A. in Politics and Government from Ohio Wesleyan University.

Brian Johnson is a Counsel for the U.S. House of Representatives Committee on Financial Services, where he focuses on issues related to oversight of the Financial Stability Oversight Council and Consumer Financial Protection Bureau. He is the founder and editor of a policy journal dedicated to issues facing Americans under 40. Mr. Johnson previously worked for Ohio Attorney General Mike DeWine, for the White House Domestic Policy Council under President George W. Bush, and for Senator Jon Kyl (R-AZ). He holds a J.D. from the University of Virginia School of Law and a B.A. in Economics from the University of Virginia.

Elan Journo is the Director of Policy Research and a Resident Fellow in foreign policy at the Ayn Rand Institute. He is the author of Winning the Unwinnable War: America's Self-Crippled Response to Islamic Totalitarianism. Mr. Journo's work has appeared in the Los Angeles Times, the San Francisco Chronicle, the Chicago Sun-Times, Foreign Policy, and others. He has offered foreign policy commentary for several television outlets and radio programs including Fox News and NPR. Mr. Journo received his B.A. in Philosophy from King's College London.

Kris Kiefer is the General Counsel to Senator Jeff Flake (R-AZ), with responsibility for all of the Senator's work on the Senate Energy and Natural Resources Committee. He previously served as Legislative Counsel to Senator Jon Kyl (R-AZ), with legislative responsibilities on issues such as water resources, Native American affairs, energy, cybersecurity, and agriculture. Mr. Kiefer holds a J.D. from Syracuse University College of Law and a B.A. in Political Science from the University of Rochester.

Derek Khanna is a Fellow at Yale Law School's Information Society Project. His research on technology and copyright law has been published in National Review, Human Events and many other outlets. He has spoken at the Consumer Electronics Show and the Conservative Political Action Conference. Mr. Khanna previously served as a professional staff member for the Republican Study Committee, where he focused on defense, technology, and national security issues. He has also worked for Senator Scott Brown (R-MA) and Mitt Romney's 2012 Presidential Campaign. Mr. Khanna holds a B.A. in Political Science from the University of Massachusetts at Amherst and is pursuing his J.D. at Georgetown University.

Aaron MacLean is an infantry officer in the United States Marine Corps and currently serves as an instructor at the United States Naval Academy. In 2009-2010, Captain MacLean deployed to Afghanistan, where he served as a rifle platoon commander in Helmand Province. He has also published on a variety of topics in publications such as the Washington Post, the Weekly Standard, and The American. Captain MacLean holds an M.Phil in Medieval Arabic Thought from Oxford University, where he was a Marshall Scholar, and a B.A. from St. John's College.

Michael Needham is the CEO of Heritage Action for America. He has worked for the Heritage Foundation as a Research Assistant to the CEO, Chief of Staff to the CEO, Director of the Asian Studies Center, and Advisor to the President. Mr. Needham also served as Special Assistant to the Policy Director for the Rudy Giuliani Presidential Committee. He holds an M.B.A. from Stanford University Graduate School of Business and a B.A. in Economics and Political Science from Williams College.

Bridget Nuxoll is an official advisor to the United States government and civilian organizations. She has worked for The Council for America, The Carlyle Group, and as an International Affairs Fellow and Professional Staffer for Congressman Daniel Lungren. Ms. Nuxoll holds an M.A. in International Policy Studies from the Monterey Institute of International Studies, a Licentiate in Bioethics and a B.A. in Religious Studies from the Pontifical Athenaeum Regina Apostolorum, and a B.A. in Education and Development from the University of Anahuac.

Katie Wheelbarger provides counsel on matters of national security and defense intelligence. She previously served as General Counsel to Vice President Richard Cheney and Counselor to Homeland Security Secretary Michael Chertoff. Prior to her time in government, Ms. Wheelbarger worked at Cooper & Kirk, PLLC and clerked for Judge Steven S. Trott of the U.S. Court of Appeals for the Ninth Circuit. She holds a J.D. from Harvard Law School and a B.A. in political science from the University of California, Los Angeles.